Why Prophet not called father but his wives are mothers of believers?

But, in the same Surah,

The Prophet is more worthy of the believers than themselves, and his wives are [in the position of] their mothers..... - (Qur'an 33:6)

What could be the reason for this?

Actually It is so because at that time Zaid(May Allah be pleased with him) was known among people as Zaid bin Muhammad. If you know the history, you may know that Zaid was servant of Muhammad(SAW) given to Him as a gift by Hazrat Khadeeja(May Allah be pleased with her). Prophet(SAW) later said that Zaid is my son(begotten son) because Zaid preferred Muhammad(SAW) over his real parents which came to take him back home and stayed with Prophet by his own will. Zaid was married with Zaynab(May Allah be pleased with her) which later was divorced by him because of conflicts between them. After being divorced, Muhammad(SAW) married Zaynab by order of Allah. Now, Among Quraish and people of Makkah it was tradition that begotten son was considered like actual son and wife of begotten son like wife of actual son so the father could not marry divorced wife of his begotten son according the rules of the pagans(mushrikeen). So they said "Hey! Muhammad(PBUH) did some strange thing and married his daughter in law(wife of his [begotten] son).." In response of this blame and to cancel an evil tradition it was declared that:

Even if i do agree with @Rehan Ullah's answer.

As this Version has not been included in the Quran which 'Othman ibn 'Affan (May Allah be pleased with him) has "collected" this must be an ahad riwaya or a qira-a shadha and therefore not acceptable القرآن لا يثبت بالآحاد, but it could be used to understand the Quran and some of the ahkam. For example if we applied the Verse of surat al-Jumu'a (62:9) as is we should run to the prayer of friday ( فاسعوا إلى ذكر الله), but on one hand we know that this isn't permissible for prayers and on the other hand al-hamdulillah we have an explanation in the Qira-a of ibn Mas'ud and 'Omar ibn al-Khattab (May Allah be pleased with both of them) telling us that we should go ( فامضوا إلى ذكر الله ) normally (some further information could be found in my answer here)!

And ibn Kathir quotes a hadith which is quoted in Sunan ibn Majah, Sunan abi Dawod and Sunan an-Nasa'i (different Versions) where the Messenger of Allah (Peace be upon him) himself says to his sahaba(May allah be pleased with them):

So in the shafi'i school some said it's permissible to call our Prophet (Peace be upon him) father of the believers as honor like it is the case for his wifes!

Others said that it is not (or no more) permissible because of the Verse 33/40!

They have also disscussed the matter if one could call somebody aunts of the mu'minyn or sister of the mu'mimnyn for his daughters and so on!

O Prophet, indeed We have made lawful to you your wives to whom you have given their due compensation and those your right hand possesses from what Allah has returned to you [of captives] and the daughters of your paternal uncles and ... who emigrated with you and a believing woman if she gives herself to the Prophet [and] if the Prophet wishes to marry her, [this is] only for you, excluding the [other] believers. ...

Number of wives of Muhammad was restricted by Quran 33.52:

Not lawful to you, [O Muhammad], are [any additional] women after [this], nor [is it] for you to exchange them for [other] wives, even if their beauty were to please you, except what your right hand possesses. And ever is Allah , over all things, an Observer 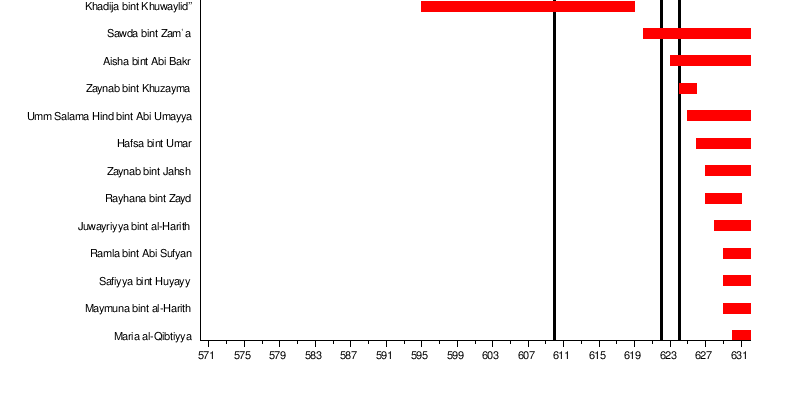 Maybe, women would doubt that they can offer themselves to marry to Muhammad, if they think that he is father of their husbands or father of all muslims. Maybe, for that that ayah (33.40) was revealed.

Not the answer you're looking for? Browse other questions tagged tafseer prophet-muhammad relationships ahl-ul-bayt wives-of-the-prophet .

20
What are the readings (qira'at) of Quran?
5
Why the title 'Mothers of the Believers' for the wives of the Prophet SAW

66
Was the prophet sinless?
10
Is Muhammad the last Rasool (messenger)?
2
Did Allah keep Zayd's ex-wife for marriage to Muhammad? (Qur'an 33:6 and 33:37)
3
Besides the eleven, who are the other possible wives of Muhammad?
3
How can Prophet Isa return to Earth without violating Prophet Muhammad being the last Prophet?
1
Covenant of Prophets? can someone explain this ayat
2
What is right and what is wrong?
1
Why is Qur'an 33:53 (which describes specific behaviors in relation to the Prophet) inside the Qur'an?
1
Why in 33:56 Allah SWT, instead of himself saying directly, is ordering to the holy Prophet SAW to tell the women of the believers?