How Can Evolutionism and Creationism co-exist in Islam?

I'm a 19 years old Muslim. I've always wondered how these two theories can coexist. In Islam pov Adam and Eve were the first two humans created and from them then humanity was formed. But it's clearly proven that evolution was the way humans formed. Cave-men were found all over the world, and we are really look alike to monkeys (DNA, Aspect, etc...). How can the theory of Adam and Eve still hold? Do Muslims acknowledge evolutionism, and if I do, do that makes me less Muslim?

There is Hadith which mentions that Adam and Even were much larger in size than us, this means that when they were sent to earth, they were not sent in the same body, but given the homosapien body (this is of course an assumption from my part).

Expansion is a form of evolution/change, Allah (swt) testifies to be the creator and controller of evolution, whether that be small biological beings like us, or the bigger entities within the universe, such as galaxies etc..

Let's say we were to find this skeleton: 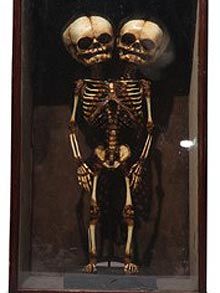 Would this be consider as a different specie?

In Islam pov Adam and Eve were the first two humans created and from them then humanity was formed.

i have checked this in quran, at these ayats: http://corpus.quran.com/qurandictionary.jsp?q=A%5Edam .

i have thought how can i interpret them all compatible with evolution? i have come to this: adam and eve were not concrete persons like us, but they were concepts, prototypes, models, each including some variations.

at some point in time when human ancestors were evolutioning, god might send these prototypes to earth, so resulting in that human ancestors set a course of evolution to form first humans in form of adam and eve.

Not the answer you're looking for? Browse other questions tagged creation evolution .

90
Is evolution compatible with Islam?

13
How can God create without determining the outcome?
9
How does Islam interpret the creation of the universe and is it compatible with the Big Bang Theory?