I've heard that Mecca was closed/forbidden to non-Muslims... I've also heard that the first is a myth, and that non-Muslims (mostly thinking of foreign tourists) may very well enter Mecca -- but that there perhaps aren't much to do for non-Muslims in Mecca...

What is correct? Is Mecca open for non-Muslims (tourists) or not? (Link to some official source is especially welcome.) I'm thinking more current enforced Saudi law, than tradition or the Quran...

No Mecca is prohibited for non-Muslims (but with details according Madhabs I answered in a separate post). That's why it's called the Haram. It is mentioned in the Verse 97 in Surat al Imran:

[3:96] Undoubtedly the first house of worship ever to be built for mankind is the one which is at Makkah: it was blessed and made the centre of Guidance for all peoples. [3:97]In it are clear Signs: there is the spot where Abraham used to worship:

then it is the sanctuary, and whoso enters it becomes safe and secure.

Allah has, therefore, a right on the people that the one, who can afford to reach the house, should perform Haj there: and the one who disobeys (this Commandment should know that) Allah is All-Sufficient and does not stand in need of any creature of the worlds

and more explict in Surat at Tawba:

[9:28] O you who believe (in Allah's Oneness and in His Messenger (Muhammad SAW)! Verily, the Mushrikun (polytheists, pagans, idolaters, disbelievers in the Oneness of Allah, and in the Message of Muhammad SAW) are Najasun (impure). So let them not come near Al-Masjid-al-Haram (at Makkah) after this year, and if you fear poverty, Allah will enrich you if He will, out of His Bounty. Surely, Allah is All-Knowing, All-Wise.

There is a Region around it which is tabu for non-Muslims.

The frontiers are according to "al Majmu' المجموع شرح المهذب" of Imam an Nawawi (as mentioned for example in the Arabic Wikipedia article about المسجد الحرام) (see map !): 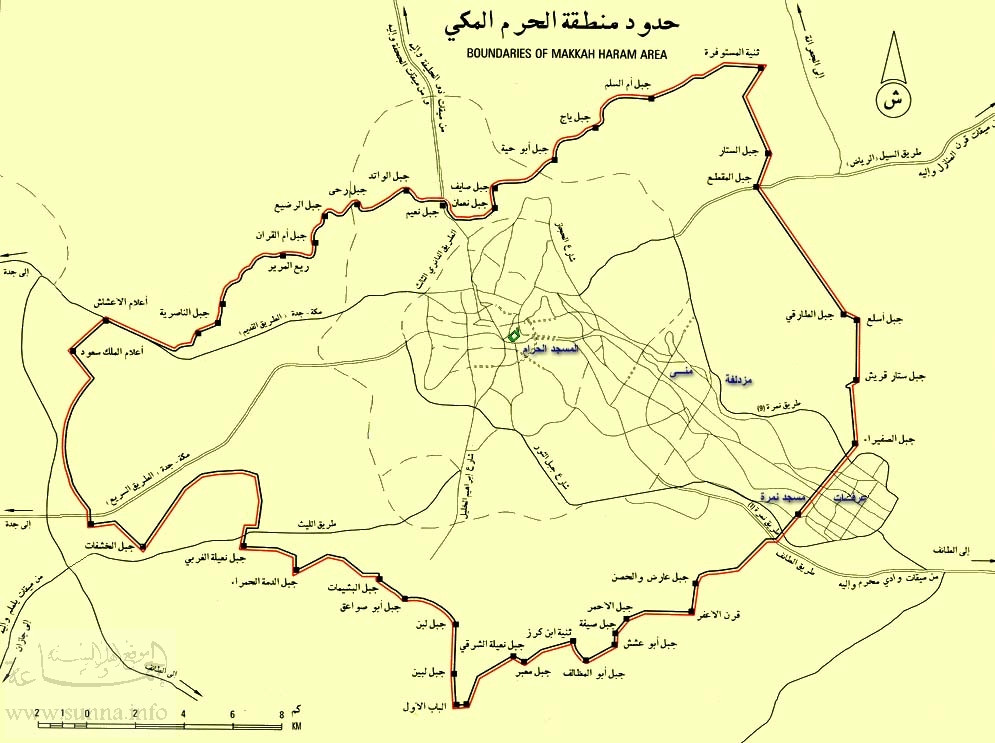 It is said that during the Khalifat of Omar (Umar) ibn Al Khattab (may Allah be pleased with him) these Tabu zone even reached about whole arabian peninsula.

By the way Saudi authorities prohibit the entrance to this zone also to Ahmadyya.

For more details see also my answer on this question.

Read also about the boundaries of the haram in Mecca here.

It is OK. It is a mis-conception that non Muslims aren't allowed to enter the Haram (nothing about Mecca). The quran says:

O you who have believed, indeed the polytheists are unclean, so let them not approach al-Masjid al-Haram after this, their [final] year. And if you fear privation, Allah will enrich you from His bounty if He wills. Indeed, Allah is Knowing and Wise.

As you see this clearly states the Masjid Alharam and not Mecca. The above Ayah is the only proof some scholars mention that you are not allowed to visit Mecca if you are not a person of the book (Muslim, Christian, Jew).

Additionally, the most important point people miss in regarding to this Ayah is the reason why it was sent. During the time of the prophet the disbelievers would visit the holy Masjid and even pray in it. This is why the Ayah was sent down to stop them from doing so.

It was reported in the Sunan Alnisay, Mosnad Imam Ahmed, and many others including Sahih Muslim and Bukhari that the prophet said when this Ayah was brought down:

When this Ayah came down the Prophet PBUH said to Ali: Call upon the people that no disbeliever is allowed to make Hajj after this year.

As you can clearly see the prophet PBUH interpreted this Ayah as going disbelievers are not allowed to go perform Hajj to the Kabbah and not what is generally believed.

As a matter of fact, many disbelievers used to come to Mecca after this Ayah came down (trade wise), and the prophet never forbade them to not come in.

The only other Hadith is the one that the prophet PBUH advised (not ordered) his people on his deathbed. The complete list is here, but I'll post one of them (they all are the same pretty much):

Ibn ‘Abbas said that the Prophet (ﷺ) gave three recommendations saying “Expel the polytheists from Arabia, reward deputations as I did”. Ibn ‘Abbas said “He either did not mention the third or I have been caused to forget it. Al Humaidi said on the authority of Sufyan that Sulaiman said “I do not know whether Sa’id mentioned the third and I forgot or he himself did not mention it.”

A small note, I changed the above text from instructed to recommended as that is what the Arabic text translates to. This was a recommendation from the prophet and not an order, since we can see that not all the Calpihate Alsalhoon did it.

In the end, and in my opinion, based on the above evidence, I see no harm in people not of the book visiting any part of the middle east, but they are not allowed to commence Hajj rituals to the Kabba.

Not the answer you're looking for? Browse other questions tagged fiqh non-muslim masjid-al-haram .

0
Why non-muslims are not allowed in mecca
8
Does Islam restrain/prohibit Jews from to pray in a mosque?
3
Why were Jews allowed to live in Yemen?
2
Slaughter houses within Haram boundaries
-3
Is Islam a religion of peace? Or a political system that perpetuates violence?

14
Why are Muslim women prohibited from marrying non-Muslims while Muslim men are allowed to?
6
Who are the guardians of Mecca according to Shia theology?
6
Are non-Muslims allowed to touch an English translation of the Quran?
13
Are muslims supposed to kill all non-believers?
3
How can a non-Muslim who believes in Allah and the prophet Mohammed visit Mecca and Madina?
1
Are non-Muslims Kafir according to Quran?
0
Why are non Muslims killed for not paying jizya?