Are Fajr & Isha the Nautical Twilights? 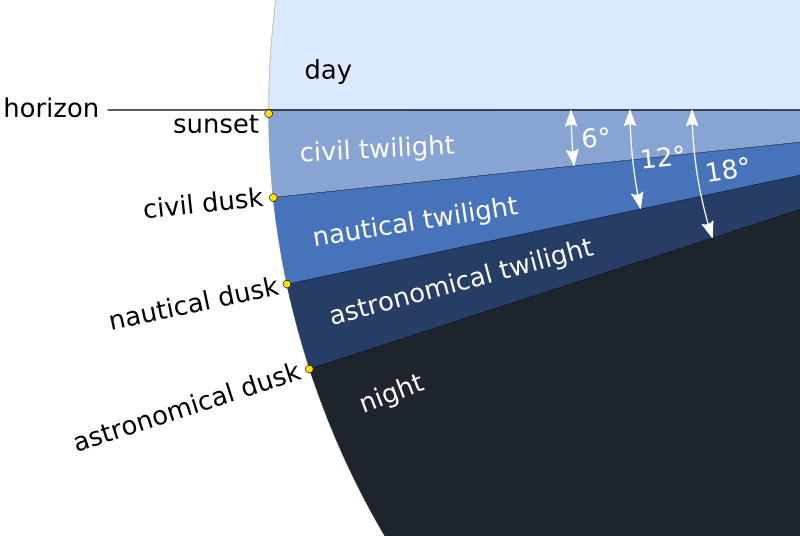 For those of you who don't know what it is, consider going through this page or this is good too.

The main concern is with morning fajr/Dawn prayer. People say the white thread - black thread, honestly, those terms don't pretty much get into my head. So, I just understood them as simply the turn over from dark to light i.e. the moment you feel there is a change. Is my understanding right?

But, practically, in this modern world I can't stand and exactly measure when is there gonna be a change. I would simply rely on the internet and check when is that twilight happening in my place.

Here is my concerned page.

The obvious concern is because I want to determine the exact time of ending my Suhr. I could safely pray my Fajr prayer after the nautical twilight anyways.

If you've gone through the page, there is a lot of difference between the nautical and Astro twilights in morning. So, wanted the exact time until when I can enjoy my Suhr

I think this page sums it up pretty well, in fact giving a general consensus of most of the scholars. According to that, there are no hard and fast rules in determining the exact solar elevation angle. It entirely depends in where you live, i.e. the time when you (in New York) spot the turn over from dark to light might differ when seen from Singapore.

A possible explanation is given that because the sun apparently travels along specific latitude on a specific date between tropic of cancer and tropic of Capricorn, Muslims in various locations around the globe have made observations about Subh-Sadiq and the results are anywhere between 9° to 18°.

And the white thread - black thread is pretty clearly explained as -

Fajr begins at subh saadiq - true dawn or morning twilight when the morning light appears across the full width of the sky. All Islamic scholars agree on this point.

I recommend you to go through the section "1. Fajr Dawn-Prayer" of that page, to get a perfect picture.

Based on conflicting estimation, It is our view that, fixing late Fajr time such as 15° could be problematic for those who intended to fast during the day and conversely saying Fajr salaat too early (e.g. 19.5° or 18°) could be equally unsafe.
Therefore 18° is good approximate for sahur (imsak) – extreme limit of pre-dawn meal if one is fasting during the day and 15° is good approximate for start of Fajr. Those prayer tables use 18° for Fajr, it is recommend to wait 10 to 20 minutes before starting Fajr salaat. Equally, complete sahur (imsak) (pre-dawn meal) 10 to 20 minutes Fajr time when using 15° table.

And now finally, to answer your question, no where in the article did the mention of angle less than 9° come up. So, Fajr time is definitely not the civil twilight.
Next, if it is nautical twilight or not. It is pretty difficult to say that. All you can do is simply, follow the trick in bold. To, be more safer,

A thing to note, is according to the rule, both, the start of Fajr Salah time and end of Suhr time are one and the same and above trick is to be just be on the safer side of both.

In the same page, under the section "5. ‘Isha (Night-Prayer)" (I think this is Sunni View), there is a little difference in opinion as to whether Isha start timing is Nautical (12°) or Astro (18°). But, it is better if you consider praying it after Astro twilight except if you're traveling or if you're a Shia, where I think you can pray Isha together with Maghrib i.e. after sunset.

Follow which is in bold above. Or, else, if you know what you're doing, i.e. by following the guidelines under 'Signs:' (see above) and if you're sure, you are able to make out the difference and calculate the apprx. Fajr start timing at your place, then

No Fajr and Isha are both astronomical twilight's.

Night is the darkest part of the day when sun goes below 18 deg of horizon. When sun is at this position, it does not contribute to any light in the sky, hence the night.

After astronomical twilight, while it is still pretty much dark, there is contribution of light in the sky from sun so it is not considered night.

In the map below, only the darkest part is night. Fajr and Isha will be observed at the darkest point and the first shade. 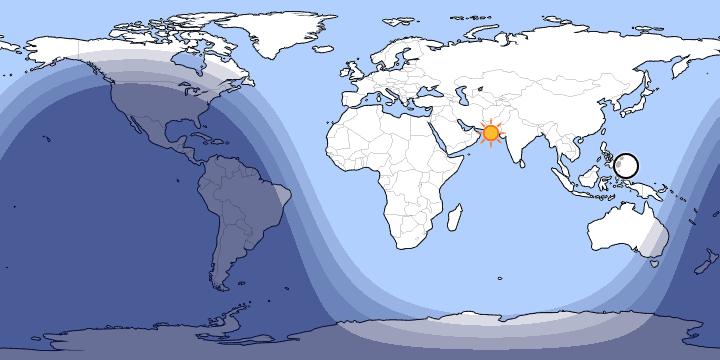 It is worth noting that many part in the world at this time of year, including London, does have proper night as the sun never goes below 18 deg of horizon, although they still observe Fajr timing there. The Fajr timing in these area, like in London, are usually 10-15 min before nautical twilight 1.

1 I don't think there is fitwa about this but probably it is general practice which makes sense.

its a Hadith by Hazrat Ayesha RA that when Prophet Muhammad SAW used to finish fajr prayers and women used to walk home you could not see them properly due to the darkness. So I think its Astronomical Twilight.

Not the answer you're looking for? Browse other questions tagged practical-islam sawm prayer-timings fajr or ask your own question.

5
What is the Sunni justification for breaking the fast after sunset instead of after Maghrib?
3
Ramadan - UK times - is it even possible?

1
Is the sunna pre-Fajr prayer before the Fajr adhan?
2
What is the time limit for Fajr prayer?
1
The Adhan for Fajr is almost to the end of time, but dawn is half an hour before
1
How did Muslims in the past wake up for fajr?
1
When does the prayer time end? (Mainly Isha)
0
Impact of praying fajr on sleep continuity
0
Fajr Starting Sunrise vs Sunrise Full