Why are depictions of Mohammed approved of in Iran?

It is my understanding that most Muslims disapprove of depictions of the prophet Mohammed (which may even be coupled with disapproval of all depictions of humans). But I recently heard that things are viewed very differently in Iran. For instance, here's an Iranian poster from the 1990's depicting Mohammed: 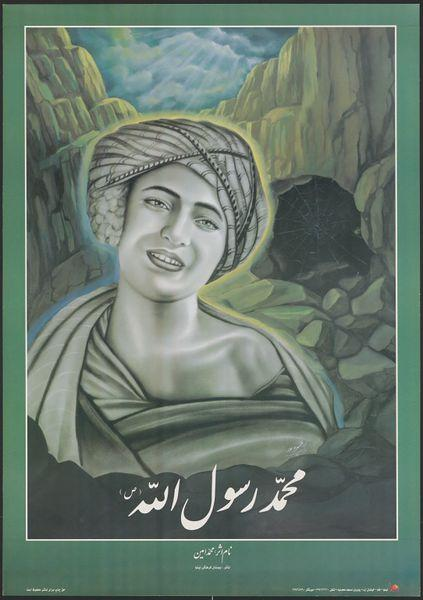 And I've heard that this same image has been used in official Iranian postcards and the like. So my question is, how did Muslims in Iran start approving of depictions of Mohammed? The leadership of Iran consists of very conservative Shiite clerics, so what caused this stark departure from such a commonly held doctrine of Islam?

Undoubtedly, there's still an unbroken consensus among Shia scholars that depictions of the Holy Prophet and the Fourteen Infallibles should not be allowed and promoted. The two main reasons offered for such prohibition:

1) such depictions are largely fantastical for nobody has ever seen any of these deceased holy individuals in person, and therefore their deceptions amount to false attribution and lie which are obviously haram;

2) they tarnish the spiritual status of these Holy individuals for, like depictions of ordinary individuals, they tend to appeal to the eyes of the viewer, whereas these individuals should be revered for their lofty spiritual and moral status.

Nevertheless, there's a general allowance for depictions of non-Islamic prophets and saints as have been in such Persian movies and series as The Messiah, The Kingdom of Solomon and Joseph the Prophet, etc. This practical compromise might be due to the fact that past Prophets and saints have already been amply depicted in the West for centuries. The artistic argument is also that such depictions help the viewer in establishing personal affinity with these holy individuals, which ultimately serves to strengthen their appreciation for Islam. For these arguments, exceptions are usually allowed for non-Islamic Prophets.

However the picture you linked above has a unique story. There was a rather widespread belief in the past among Iranians that this was an authentic depiction of the Holy Prophet during his youth by a Christian painter. But this story has been debunked by a rather embarrassing revelation in an a 2006 ISIM Review article which traces the picture to the photo of a Tunisian young boy which was taken by a Czech photographer in early 20th century. The article however identifies a modified painted copy of the photo as the original but the following photo has been identified as most original. 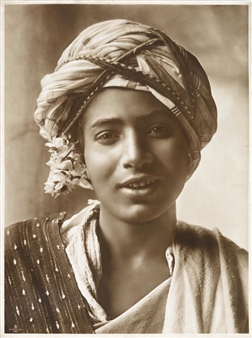 The photo was reportedly picked up and published by several Western journals under various titles including "Ahmad" and "Mohamed", and this may explain why it evolved into the said public myth.

I can also recall another old portrait prototype with an unknown origin with several different versions that circulated among Iranians. This one depicts a middle aged man in turban and robe. 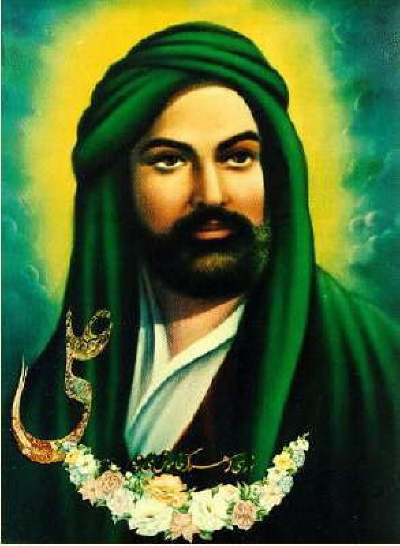 I had seen different versions of this used in the name of Prophet Muhammad or Imam Ali. But likewise this also stands for a trend of bad culture and ignorance, and not any supportive religious ruling. So even if they were found to be used in some Iranian official publications, it does not mean that they had been authorized by a religious scholar. There are a lot of not so Islamic things happening in Iranian bureaucracy and organizations that the Supreme Leader, Ayatollah Khamenei and other religious scholars do not agree with. But their strategy for eliminating our various sociocultural ills have always been to address foundational causes by instituting long-term plans and policies, besides the traditional practices of lectures and preaching.

Remember Iran suffered under a secular colonialist rule for about 6 decades until the Islamic Revolution of 1979 founded the Islamic Republic, and we've been struggling ever since to eradicate the influences of both secular and superstitious culture of the Pahlavi and Qajari (the Qajar dynasty) eras, and to forge an Islamic society. And the failures have been as common as the great achievements.

2
Are images of Muhammad "quite common nowadays" in Shia Islam, and if so, where can I find them?

13
Why did Prophet Mohammed (saws) not let Ali marry another woman?
10
Why Jesus was born as faultless son and why not Mohammed?
5
How does Iran justify women in the police force? (Shia View)
7
Did Mohammed (saw) see Allah (subhana wa taala)?
12
Is Mohammed a deity?
3
Encounters of Mohammed with Jewish scholars/leaders?
2
Why is making a picture of Mohammed disrespectful?
5
Muhammad, Mohammad, Muhammed, Mohammed, Mohamed, or Mohumed?
2
What was really new about the message of Mohammed?
2
Why are pictures of the Prophet Mohammed not allowed