Can slave woman show herself to her master?

Some Muslims argue that male master can have sex with female slaves, even without marriage. See my answer here why they should be married for having relation with them Are Muslim men allowed to take "sex slaves?"

My question is Quran lists the group of people a woman can show herself in 24:31 but strangely her master is not included in this list. Isn't this proof that female slave can't have sex with master without marriage ? It can be argued that 24:31 is talking about Muslim women and slaves are non Muslims. Then if a slave woman converts to Islam after her being enslaved, will she become forbidden to her master as she cannot reveal herself to her master ?

salaams regardless of whether or not the woman slave is muslim or not, the master should not have intercourse with her, so long as they are not married together (if the slave is a muslim, she is to be freed). This is because no matter what, it will always be counted as zina if the intercourse is out of marriage. Regardless of whether or not she is muslim, the man should also always lower his gaze, so this shouldnt be an issue, but yes, the slave women should cover herself as much as possible and try to avoid being alone around him too much. There is a reason why marriage is so important in islam, and one of the reason is so the men and women can fulfill their desires in a lawful manner

There are two types of women: Free and slave. The Ayah you are referring to: 24:31 applies to free woman. In contrast some scholars say, because of that Ayah that the Free Woman Awrah is the same for her father as her male/female slaves, which is included in the Ayah you posted:

Or what she owns

Let me add that the ruling for a slave women is different than free woman. So a master can indeed have sex with his slave women as prescribed in the Quran in many instances including [33:50]:

O Prophet! We have made lawful to thee thy wives to whom thou hast paid their dowers; and those (slaves) whom thy right hand possesses out of the prisoners of war whom Allah has assigned to thee.

A slave can still be Muslim in only two situations:

Let me add that Hijab was never required for Muslims (it was something that eventually, down the line, became more of a religious thing opposed to culture, which is how it stared). Jilbab on the other hand was prescribed to free woman to differentiate between them and slave woman: as reported that Omar used to hit slave woman who dress up in Jilbab ابن تيمية - حجاب المرأة ولباسها في الصلاة - تحقيق محمد ناصر الدين الألباني- المكتب الإسلامي - ص 37.

Yes, she can because there is Ijma (consensus) that it is permissible to have intimate relations with slave women, even without marriage, and hence by consensus there is no 'awrah of a slave woman in front of her master هـ, because it follows logically from that permission.

This is proven in the Quran, where they are mentioned besides and separately from wives:

Then marry those that please you of [other] women, two or three or four. But if you fear that you will not be just, then [marry only] one or those your right hand possesses.

It is also proven by the practice of the Prophets Abraham, David, Suleman عليه السلام as well as that of the Prophet Muhammad ﷺ who had relations with his female slaves: Rayhana and Maria without marriage. The same has been practised by the Sahabah: Ali bin al-Husain ibn Ali, Qasim ibn Muhammad ibn Abi Bakr, Salim bin Abdullah ibn Umar were among the well known children of the Sahabah from Umm Walad slaves.

To insinuate that all of these people and generations after generation of Muslims have misunderstood the Quran and erred, and that you have understood it correctly, is not credible and is equal to negating the statements of the Quran itself (see 9:100, 3:110, 4:115).

Regarding the verse of the Quran that you have asked about:

... and not expose their adornment except to their husbands ...

The word here is بعل (Ba'al) which can mean both husband or master. See Tafsir al-Qurtubi: 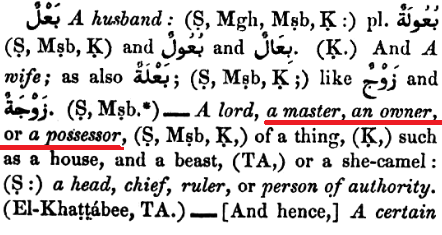 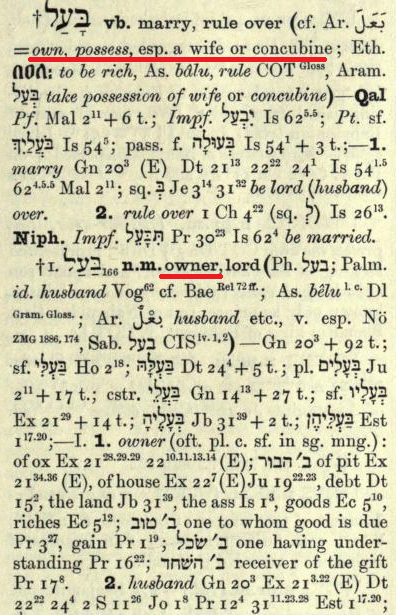 So, the owner of a believing slave woman is among the people who have been granted the concession.

هـ An exception is where the original owner has married off the slave to another person. In this case the owner can not see her private parts, nor have relations with her, and her ruling will be similar to that of a mahram.

Not the answer you're looking for? Browse other questions tagged slavery awrah .

53
Are Muslim men allowed to take "sex slaves?"
4
Is hijab wajib (obligatory) for a slave woman?
8
Is hijab obligatory in Islam?
5
Is forced slavery (cause of rapes) allowed in Islam?
2
Why Maria al-Qibtiyya(r.a) is considered as a slave?

53
Are Muslim men allowed to take "sex slaves?"
4
Is hijab wajib (obligatory) for a slave woman?