Is it universally agreed which surahs are Meccan and which are Medinan? If so, when did this agreement arise?

I've found several lists online (example) of surahs, where the classification of Meccan or Medinan is given for each surah. Every list seems to classify them the same way, whether the list follows the traditional Egyptian chronology or Nöldeke's chronology. Is that because Muslims agree, or am I missing a crucial piece of the picture? If there is widespread agreement, how did it come about?

Most copies of the Qur'an have an entry at the beginning of each sura stating the name of the sura, whether it is Meccan or Medinan, and how many verses it contains. These superscriptions are not considered to be part of the revealed text, but they are fairly uniform in copies of the Qur'an.

Just one example (below): the last word on the left in the gilded panel is "makkiyya," indicating a Meccan sura. 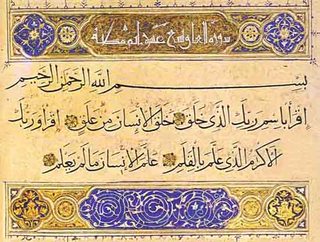 There is also a whole branch of Islamic learning called asbābu t-tanzīl (أسباب التنزيل) which is concerned with determining the circumstances in which any given sura was revealed to the Prophet. Of course, there is a lot of disagreement about the details. So the answer to your question is: no, there is no universal agreement.

Not the answer you're looking for? Browse other questions tagged quran surah .

5
Did the stories in Quran happen as is, or are they symbolizing different and more common events?
12
Are there Islamic guidelines on how and when to protest?
2
Which intoxicants and relaxants are not forbidden?
2
When was the first word "Kafir" / "Kuffar" reveal in the quran? and which surah?
3
Coping with translating the Qur'an into Chinese and Chinese characters (hanzi) which are caricatures of animals?
0
What are some Islamic instructions on who you should discuss Islam with and when to end it?
2
Why are orphans considered orphans when their father dies and not when both their parents die?
2
Are there surahs in the quran which state that the moon is lit by reflected sunlight?