According to the Quran, is man created from a clot of blood?

In the very first revelation on the prophet in Cave of Hira, when the light (Gabriel) spoke the to prophet for the first time, I see a technical difficulty, when Gabriel said, God created man from a clot of blood. This is not true. Blood has no role in creation of human being. Why it was said, man was created from a clot of blood? This is surah 96 verse 1-3

tafseer creation surat-al-alaq
Share
Improve this question
edited May 4 '16 at 5:30

If you see sahih international the translation says "clinging substance".

The word used in the Quran is عَلَقٍ (alaq), which would denote "hanging" or "clinging".

It also has roots to علقة (alaqah), which would mean a "leech" (which is a worm that hangs or clings to its host and sucks blood).

Below are the images of a leech and embryo.

Between the 37th and 44th day (16 - 17 - 18 in image), the embryo looks similar to a leech. The embryo also acts like a leech by clinging on its host and drawing its nutrition from its host. 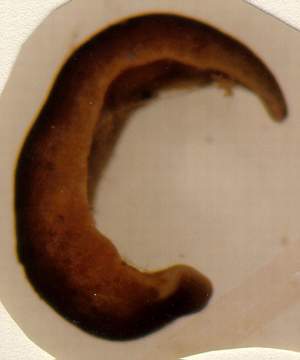 Not the answer you're looking for? Browse other questions tagged tafseer creation surat-al-alaq .

6
Where did humans come from?

6
Where did humans come from?
2
Tafseer this ayah [2:30] "إِنِّي جَاعِلٌ فِي الْأَرْ ضِ خَلِيفَةً"
7
Can there be several universes?
2
Was Prophet's light created by Allah's Light much before anything else was created?
6
How did angels know that mankind would spill blood prior to their mankind's creation?
6
Does Qur'an 7:189 imply women were created to benefit men?
0
Meaning of Chapter 10 Verse 94
0
Were Adams and Jesus‘ Spirit part of similar events?