Is it permissible for a Muslim to kill another Muslim out of self defense?

I ask this question is in concern that the story of Abel (هابیل) and Cain (قابیل) when the first murder on earth happened between mankind. In that case, one side didn't fight back the murder but simply warn the other side of the hell fire.

However; I don't understand why we should not allow self defense even against Muslims.

For example, if a Muslim is shooting at you or going to stab you, are one suppose to just let the other side do it? Or any type of self defensive actions are allowed in Islam in this type of scenario?

In regard to the initial part of your question that you pointed to the story of Habu and Kabu (abel & cain) (هابیل و قابیل ), you also mentioned that " one side didn't fight back the murder but simply warn the other side of the hell fire"

So, the verse below (4:93) could be related with that story:

But whoever kills a believer intentionally - his recompense is Hell, wherein he will abide eternally, and Allah has become angry with him and has cursed him and has prepared for him a great punishment. (93)

or even we can pay attention to the following verse (Surah al-Nisa:94) which could be related with the issue of Takfir (excommunication)

O you who have believed, when you go forth [to fight] in the cause of Allah, investigate; and do not say to one who gives you [a greeting of] peace "You are not a believer," aspiring for the goods of worldly life; for with Allah are many acquisitions. You [yourselves] were like that before; then Allah conferred His favor upon you, so investigate. Indeed Allah is ever, with what you do, Acquainted. (94)

On the other hand, rationally (and even canonically) it is Wajib (mandatory) for us to defend ourselves. (of course by observing some points…). Even according to a Hadith from Imam Ali (a.s.):

(briefly): whoever of you who is able to defend his friend (against the enemy), So he should defend him(his friend) as he defend himself.

The Hadith(tradition) above shows that as well as ourselves, it could be our duty to defend our friends too (of course by paying attention to its conditions according to the positions and so on)

Accordingly, even as you gave an example "if a Muslim is shooting at you or going to stab you, are one suppose to just let the other side do it? Or any type of self defensive actions are allowed in Islam in this type of scenario?"

Then this is your duty as an obligatory deed to save your life.

Or let me give you another example which is related with your question (but in a larger field):

In the war between Iran and Iraq (some years ago), Iraq attacked Iran. As you probably know, Iraq is an Islamic country, then shall we say Iran ought not defend itself because the soldiers of Iraq were Muslims? (and allowed them to kill themselves?)

It's completely justified and accepted to defend yourself, against non-Muslims and fellow Muslims who ever attack you.

Some scholars debate different conditions related to this hadith and situation; what if you can give some money to send him away? what if you can dismiss him by giving him your money and save your life? what if you can't physically fight him back? these are some conditions that give you "the choice" not to fight back according to some schools. but the hadith is crystal clear that you are allowed to fight for you money in the first place, and for your life if it turns into a fight, and that if you get killed you are a martyr, it's obvious that you do not have to be sure that fighting back is a guaranteed win, just defend your money and your self.

Now come to the Habu/Kabu incident, first of all you should know that whatever shari'a and acts of prophets or good people prior to prophet Muhammad (Peace be upon him) is not a part of Islamic shari'a unless stated clearly in Quran or Hadith that it's a shari'a, this means that whatever Habu said and did is not to be followed by Muslims just because we know about. the next hadith is mistakenly taken as an order to act like the good son of Adam who did not defend himself.

The Messenger of Allah (ﷺ) said: Before the Last Hour there will be commotions like pieces of a dark night in which a man will be a believer in the morning and an infidel in the evening, or a believer in the evening and infidel in the morning. He who sits during them will be better than he who gets up and he who walks during them is better than he who runs. So break your bows, cut your bowstrings and strike your swords on stones. If people then come in to one of you, let him be like the better of Adam's two sons.

The hadith tells about the time of Fitna just before the last hour, and since we do not know for sure if we are at this specific time, we do not have to follow the instructions of that situation, and we are meant to follow the previous hadith.

No, it isn't wrong to accidentally kill the attacking person, but it is said in the Quran that if you accidentally kill a Muslim then you should free a slave, and if his/her family asks for blood money then pay it, You should avoid killing as far as possible as is said in Surah - An_Nisa (92) 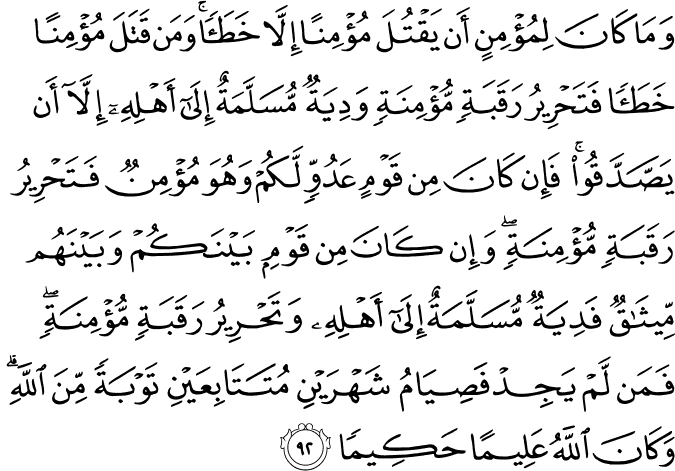 If you should raise your hand against me to kill me - I shall not raise my hand against you to kill you. Indeed, I fear Allah , Lord of the worlds.https://quran.com/5/28

It's a story of love there. One side really loves his brother his kin, while the other hates him. It's a great story for everyone. Even for kids.

If there classmate says I'll hit you they can respond back well I wouldn't want to hit, it's not the right thing to do. A husband/wife can tell their spouse even if you want destroy my life, I wouldn't do that to you. It's not right. (I'm fearful of Allah... as Allah would only انما یقبل الله من المتقین/ Indeed, Allah only accepts from the righteous [who fear Him].)

The verses are a discussion between 2 brothers. There's love between them, or at least one way. One is pious as mentioned in verse 27 and the other isn't. He's saying my brother (that I love), IF would want to kill me then I wouldn't want to kill you. He's trying to say I won't fight you... so he wouldn't fight either. It's not like if he starts bashing him he would just stand until he's done. He would defend himself and ultimately if needed if it gets to a point where he needs to kill his brother so he can defend himself he would do it. I think Abel defended himself as that's a rational thing to do... which is also mentioned in the other answers... but ultimately he was killed by his brother.

So to answer specifically, it's best to avoid it as Abel tried to avoid, but if it's inevitable then must defend yourself to a fair extent.

Not the answer you're looking for? Browse other questions tagged halal-haram self-defense or ask your own question.

2
Is hurting an animal for self defense allowed in Islam?
5
Is self-defense mandatory for a Muslim?
4
Is it permissible to take false oath on Quran to save self honour/ self respect?
4
Is it permissible to kill a person in order to save my own life?
4
Is Qur'an 22:39-40 permission only for self-defense, or also permission for retribution?
2
What are the conditions that allow killing animals out of self-defense?
0
Is talking to my self out loud and saying bad words haram?
0
About lying as self defense and saving a life