Is it true that Hazrat Fatima (R.A) soul was taken by ALLAH Himself 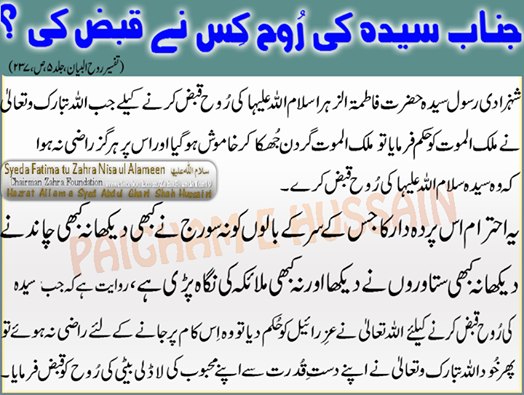 I have attached a file which is circulating through facebook alot these days. I would like to know that is the information provided in the file wrong ? because it is against the basic teachings of islam and if it is not wrong then isnt it a great sin? The file attached is a reference from Shaykh Ismail Haqqi.

Rasool Mohammed's(PBUH) daughter Fatima (AS) when passed and Allah ordered Izrael to take her soul, he refused in honor that neither the sun has seen a hair of her head nor the moon nor the stars and nor any other angel. It is narrated that when he refused to do so Allah had done the task of taking soul of his beloved Mohammed's(PBUH) dauhter himself.

This seems unnecessarily romantic and mythic to be true, and Islam is a clear and straightforward religion. However, if we assume for the sake of argument that it were true, who would have been there to report it? Remember that Sayyidatna Fatima died shortly after her father, peace be upon him. Who would have narrated this? Hope this helps.

It's TRUE because in these Mohammed saw is absent, but he said that my followers will be divided into 73 sects. He told us about the day of judgement, etc. Maybe he saw told to anyone at that time. Actually, there are some issues in Islamic history. It is written in the era umayyad dynasty which were very against hashmi.

Not the answer you're looking for? Browse other questions tagged sharia .