Many typing forms for some Islamic terminologies

I am bit confused about this. I've seen some people type some Islamic terminologies in English using different forms. For example:

It could be that the person was busy with work or that person has typing difficulties which led to typing these in a different form. Is this permissible in Islam? To write a specific terminology in a different from than the one which majority muslims are used to it ?

I asked a local scholar and I was told its OK because in his heart, that person actually meant to type the correct word but instead, that person wrote it in a different form due to the urgency of replying immediately.

sharia arabic muslim-practices
Share
Improve this question
edited May 11 '14 at 3:28

"Salam" simply means peace and some Muslims even say just salam instead of Assallamu Alaikum. As long as the meaning does not change it is ok. In Shaa Allah should be written like this to avoid the meaning being changed. 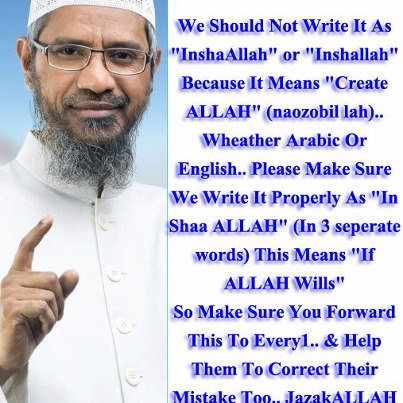 Not the answer you're looking for? Browse other questions tagged sharia arabic muslim-practices .

9
What is the difference between the east (مشرق) in singular, dual, an plural forms?
4
What is the consequence for breaking a promise made in the name of Allah?
7
Is there one Islam or many Islams
5
How did ibn Saud have so many wives?
5
How many writing styles of Mushaf Quran that exist?
5
Are the letter forms of Arabic essential to the Qur'an?
2
Is Islam a religion only revealed for Arabs?
2
Why do some mothers from the sub continent spent the first 40 days after child birth at their mother's place?
0
Will Allah reward a person for just gaining Islamic knowledge?