What color is Jesus, and is there a Hadith contradiction?

In some hadith, Jesus is said to be of red or reddish-white. eg:

Narrated Ibn `Abbas: The Prophet (ﷺ) said, "I saw Moses, Jesus and Abraham (on the night of my Ascension to the heavens). Jesus was of red complexion, curly hair and a broad chest [ ref ]

Also see Jesus was reddish-white.
Yet another hadith says:

Narrated Salim from his father:
No, By Allah, the Prophet (ﷺ) did not tell that Jesus was of red complexion but said, "While I was asleep circumambulating the Ka`ba (in my dream), suddenly I saw a man of brown complexion. He was the son of Mary. [ref]

Only Allah knows the truth, but my question is: why two sahih hadiths contradict each other or, why two contradicting hadith are graded as sahih?

There is no contradiction in the original Arabic text of Hadiths.

I checked the translation, it translates this part (A man "Aadam") as (a man of brown complexion), and that is because they translate the word, but it does not work that way, in Arabic you need to understand the context so if you read the word Adam in Moajam (Arabic dictionary), you see it has different meanings one of them is dark complexion, but another meaning is complexion, and if you read the Arabic explication for the group of Hadiths about Jesus, it's clear that Jesus had white reddish complexion. ِِ

which is translated to :

Man with complexion which is the best you may see for men complexion.

Now try to join both Hadiths, it's not complicated, he has white reddish complexion as the best you may see for a man.

That, and Allah knows best.

I'd like to mention an unexciting explanation as to how they can both be correct: i.e., Ibn 'Abbas saw a man of red complexion whereas Salim saw a man of brown complexion. It's hard to tell red from brown.

From the xckd Blog color chart, we see that red and brown are next to each other, and are hard to distinguish: 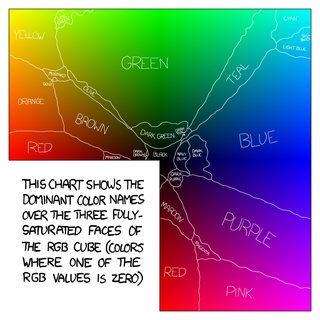 In addition, there's other possible factors:

I don't know if these apply, but when it comes to humans distinguishing between colors, it's blurry.

The Ancient Israelites were people of color, Isa was probably light brown in color with chiseled features, such as a aquiline nose and a youthful look.

Moses is described as being dark-skinned. https://www.youtube.com/watch?v=4T4J55Fu5jo&t=1411s

The prophet Muhammed ( sallallahio alayhi wa salami) said in sahib Muslim Hadith that he saw Prophet Isa ( pbuh) going around around the kabah leaning on two Angels and his skin was a beautiful brown color,the color red is destincly different from brown,you have to be careful of what you read during these times the enemies of Islam have access to the various Hadith,whereby printing their own interpretation,so that they can create confusion .

5
Are Christian images of Jesus sacrilege?

10
Why Jesus was born as faultless son and why not Mohammed?
10
Why has black hair dye been singled out?
3
At what age did Mohammed(PBUH) passed away?
3
How to interpret the hadith concerning Umar on direction of prayer, hijab, and advising the Prophet's wives?
1
Explanation of hadith forbidden from drinking from green jars?
2
How did 1500 Sahaba perform ablution from one container?
2
“I refrained from narrating this Hadith…”